"Europe for Aviation” teaming up to tackle sustainability, capacity and innovation at the 2020 World ATM Congress

Due to the inordinate amount of travel restrictions imposed on exhibitors and attendees at both national and organisational levels, ATCA and CANSO have decided to cancel World ATM Congress 2020.

As a consequence, SESAR JU theatre sessions and Walking Tours are also cancelled.

The “Europe for Aviation” team, made up of eight European aviation organisations working to implement the Single European Sky (SES) will gather at this year's World ATM Congress, from 10 to 12 March in Madrid, Spain. Over the course of the 3-day Congress, these organisations will showcase how through collaboration they can go much further tackling the most pressing challenges facing aviation, such as sustainability, capacity and innovation. 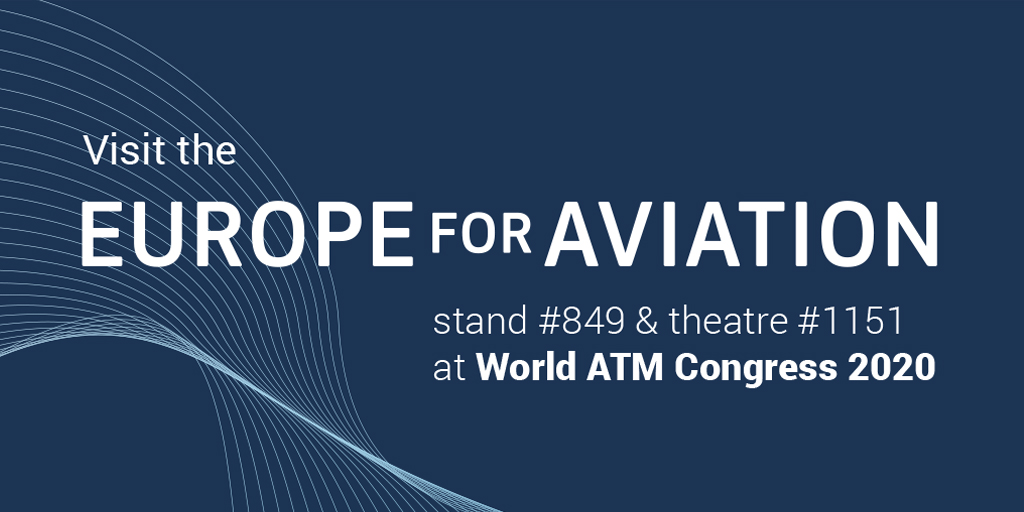 The “Europe for Aviation” stand and theatre (#849 and #1151) will host a wide range of debates, presentations and guided SESAR walking tours, illustrating the collaboration in action between the European aviation organisations working to implement SES, namely the European Commission, EUROCONTROL, SESAR Joint Undertaking (SESAR JU), SESAR Deployment Manager (SESAR DM), European Union Aviation Safety Agency, European Defence Agency, Innovation and Networks Executive Agency (INEA), and EUROCAE. In doing so, these EU bodies will show how between them they cover the full project management cycle from policy and funding to research and deployment.

Register at the Congress and gain free access to the “Europe for Aviation” stand and theatre.

Organised jointly by the SESAR Joint Undertaking and the SESAR Deployment Manager, the walking tours will give visitors an opportunity to meet with experts from the SESAR community and see first-hand the wide variety of solutions that are being delivered and deployed across Europe.

Find hereafter the schedule and description of the walking tours.

In order to participate in the walking tours, visitors must register in advance via: