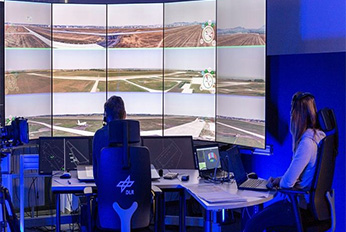 In 2019, several open days were held in Sweden, Norway, Germany and Hungary to present the results from validations of the multiple remote tower concept. The open days, which were organised within the context of the SESAR PJ.05 project, allowed participants to see first-hand how the concept works in real operational environments. Remote towers are already a reality for leading air navigation service providers (ANSP) across the world.

This operating concept is at the forefront of ATM service provision, however the potential of this technology continues to be explored by SESAR partners with regards multiremote towers, a concept where an air traffic controller could provide services to multiple aerodromes. For the Hungarian validation exercise, camera systems were installed at the three airports involved in the project that provided live video streams which were displayed on a monitor wall. In addition to the video stream, controllers were supported by live radar information, and could listen to live radio communication and get relevant flight information.

The Hungarian validation simulated traffic for three Hungarian airports (i.e. Budapest Airport, Pápa Military Airbase, and Debrecen Airport) and looked at how a single air traffic controller could control these airports simultaneously in a multi-remote tower module (MRTM). The validations were carried out by DLR, responsible for project coordination within SESAR, Frequentis as the technology partner, and HungaroControl as the experienced ANSP to implement this experimental concept into daily operations. Meanwhile in Sweden, an open day hosted by SESAR member Saab (NATMIG) presented the results of two different SESAR trials on multiple remote towers coordinated by COOPANS (LFV). In the first exercise, one air traffic controller handled two airports simultaneously.

The second exercise showed how three airports were simultaneously handled by one air traffic controller. A follow-up close out event gave participants the chance to visit the brand new remote tower control (RTC) Stockholm from which in the near future several Swedish airports will be controlled. Two further open days took place in Germany, organised respectively by DFS and Frequentis, and AT-One (DLR), B4 (ON) and Frequentis, looking at the flexible allocation of aerodromes between multiple modules. Finally, in Norway, Indra successfully validated multiple remote tower operations with Norwegian air navigation service provider (ANSP) Avinor, showing the possibility to manage multiple airports from one single integrated screen. www.remote-tower.eu/