RAID (RPAS ATM Integration Demonstration), is conducting a flight trial campaign to evaluate the impact of drone integration into unrestricted airspace. The trials follow a successful series of real-time simulations (RTS), which have received positive feedback from stakeholders.

RAID is one of several demonstration project co-funded by the SESAR Joint Undertaking aimed at the safe integration of civil remotely aircraft systems (RPAS). Led by CIRA, the Italian Aerospace Research Centre, the project aims to demonstrate and evaluate the impact of integrating drones into unrestricted airspace within current air traffic management environments. 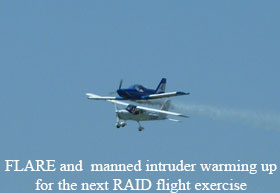 The project is specifically looking at the short-term implications of such activities through real-time simulations and flight tests. The RTS were conducted in March 2015 using CIRA’s RPAS ground simulation facility and ATC simulators owned by Malta Air Traffic Services (MATS) and the University of Malta, using licensed air traffic controllers, as well as, RPAS and pseudo pilots. The results of RTS phase were presented in the first workshop held at the Italian Military Airforce headquarters on 10 December 2015.

The project also recently launched a flight trial campaign using the CIRA experimental vehicle FLARE, an optionally piloted vehicle developed by CIRA on a Tecnam P92 Echos-S vehicle. Both manned and unmanned aircraft are also involved in the trials. During the trials, a number of evaluations are being carried out by the team, notably with regards human, safety and security factors in different operating scenarios. Specifically, the trials are evaluating:

The results of the trials campaign will be presented to the public audience and stakeholders in the next month of June, in the project closing workshop.

The RAID consortium is led by CIRA and involves Italian SMEs – DeepBlue, NAIS, Nimbus –MATS – and the University of Malta.