The SESAR Joint Undertaking (SESAR JU) presented its research and innovation (R&I) on air traffic management (ATM), including drones, at a special public hearing on digitalisation of transport modes at the European Parliament on 20 June. SESAR was also the topic for discussion at a dedicated Parliament workshop on the same day, which highlighted the results delivered so far and the value of R&I investments for ATM.

Organised by the Committee on Transport and Tourism (TRAN) and chaired by MEP Karima Delli, the public hearing aimed to understand better the impact of digitalisation in various transport modes. Representing the SESAR Joint Undertaking, David Batchelor, Head of International Affairs, put into perspective the challenges facing aviation in the coming years, such as the significant air traffic growth. ATM will need to adapt to this increased traffic and the move from thousands of conventional aircraft in the sky every day to potentially hundreds of thousands of highly connected and automated air vehicles or devices, offering advanced data-driven services and operating in all environments. 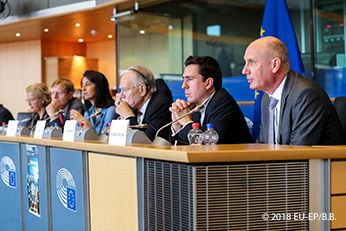 While technology will be key, it should not be seen as the end but rather the means to addressing the challenges and delivering a more efficient ATM system, noted Mr Batchelor.  Digital technologies are enablers for the SESAR concept of operations and the vision to deliver safer, smarter and greener air travel in Europe. He pointed to the 60 plus technical solutions already delivered by the JU and solutions in the pipeline in SESAR 2020. Mr Batchelor also presented the JU’s work on addressing drones in the airspace, and support to deliver by 2019 initial services for the Commission’s U-space initiative. With many regions around the world working in parallel on drone traffic management, he noted the importance of the JU’s involvement in coordination efforts by the International Civil Aviation Organization (ICAO) – which is ensuring that emerging solutions are safe, secure and sustainable. 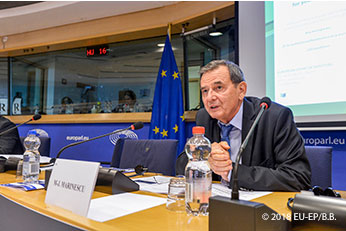 SESAR was also a topic for discussion at a dedicated workshop, Organised by the Policy Department on Budgetary Affairs for The Committee on Budgetary Control and chaired by MEP Dr Ingeborg Grässle. Presenting on behalf of the JU, Peter Hotham, Deputy Executive Director, noted the importance of R&I for ensuring the growth and global competitiveness of European aviation. He highlighted the results delivered by the JU so far and the benefits they bring in terms of operational and cost efficiency, safety and environmental impact. These come at a fraction of the cost of the industry’s overall investments - namely 2.5% of all revenues, he noted. Mr Hotham concluded by recalling that the R&I activities, as outlined in the European ATM Master Plan, are on schedule and aim to be delivered within the scope of SESAR 2020.

Public hearing on digitalisation in transport