The first three batches of RETINA project validation exercises were successfully completed in November in the Virtual Reality and Simulation Laboratory at the University of Bologna, Italy. The validation platform set up at the laboratory was able to mimick the Bologna airport environment, a typical regional airport where low-visibility conditions regularly impact the operations’ to make it more concrete. There RETINA partners (Fig.1) tested a set of goggles (Hololens) through which controllers could see augmented reality 3D symbols overlaid on the out-of-tower view (Fig.3). The project validated the goggles by means of human in the loop real-time simulations where the out-of-the-tower view was provided to the controller in a semi-immersive reconfigurable virtual environment capable of simulating any type of weather/visibility condition on any airport with a high degree of realism (Fig.2).

The results confirmed the expected benefits in terms of:

The validation outcomes confirm that the technology is mature enough be tested in a real operational setting, thereby demonstrating the effectiveness of the SESAR lifecycle, from innovation to solution.

The RETINA project brings together the following partners: 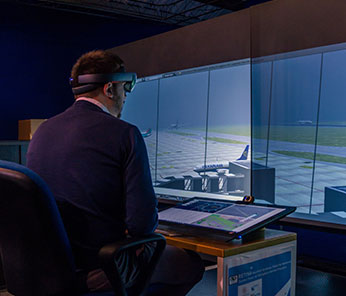