Partners in working on the SESAR Solution “wake turbulence separation optimisation” are demonstrating the effectiveness of a system using plate lines – parallel plates arranged one after another - to reduce wake vortices at large airports.

Small and medium-sized aircraft currently have to maintain a safety separation of approximately 10 kilometres from larger aircraft flying ahead of them. The reason for this is wake vortices that are created by the preceding aircraft can potentially create turbulence and destabilise the aircraft behind. Austro Control and the German Aerospace Center (DLR) are working together with other partners at Vienna International Airport to reduce the lifetime of wake vortices in the approach area and thus further increase safety. The researchers are using a system of parallel ground plates, which causes wake vortices to dissipate more quickly. A laser measurement system (lidar) is used to record the behaviour of wake vortices in detail for subsequent evaluation. 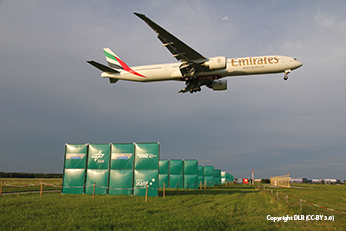 The project aims to demonstrate the effectiveness of the plate lines at large airports. “The very first evaluations of the new measurements in Vienna show that the wake vortices near the plates decay noticeably faster there as well,” says Frank Holzäpfel of the DLR Institute of Atmospheric Physics.

With the results from recent validations, the partners aim to bring the solution to sufficient maturity level which may open the door to deployment and industrialisation. Over the course of the next two years, the partners will refine the specifications of the system and to complete an installation at Vienna Airport in order to demonstrate the benefits more widely.

"The project team has done a great deal to enable this unique system to be tested during full-scale operations at a busy airport. Initial results are very encouraging, and if the effectiveness of the plate lines is fully confirmed, as expected, they will be able to provide increased safety and capacity at all airports in the future,” says Christian Kern, Director of the Air Traffic Management Department at Austro Control. 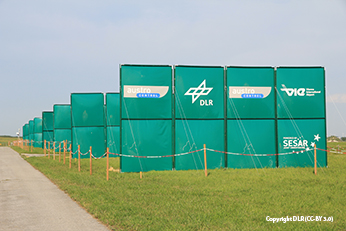 High up in the air, wake vortices usually descend quickly, drift away and finally dissipate. Near the ground, they can hover for some time, a short distance upstream of the runway threshold. This is exactly where subsequent aircraft finish their approach. A system of plates arranged in parallel one behind the other, referred to as a plate line, can be set up to attenuate the circulating vortices in front of a runway more quickly. Secondary vortices form on the plates, which are about nine metres long and 4.5 metres high in this test installation. This causes the wake vortices to decay much more quickly.

The construction of new runways at established airports is associated with an immense effort, with inhabited areas often affected by the expansion. If, in future, aircraft are able to land with reduced separation distances while maintaining the required level of safety, existing facilities could be used more effectively, thus eliminating the need for additional runways.

Wake vortices are long-lasting, rotating airflows that are generated by every aircraft. They are formed by air ‘rolling’ up over the tips of the wings as it moves from the higher-pressure region beneath the wing to the lower-pressure area above. These powerful vortices can have severe effects on aircraft following closely behind and can also cause damage to structures on the ground. Smaller aircraft are particularly sensitive to the wake turbulence from wide-body passenger jets and have to maintain extended separation distances for safety reasons.

The SESAR Solution is one of several solutions developed within the framework of the SESAR JU ‘Increased Runway and Airport Throughput’ project (PJ.02 EARTH), which has received co-funding from the European Union's Horizon 2020 research and innovation programme under grant agreement No 731781