Guillermet joined the SESAR Joint Undertaking in 2008, first as Chief Programme Officer and then as Deputy Executive Director, before taking up the leadership of the organisation in 2014. Guillermet oversaw the successful completion of the first SESAR research and innovation programme, as well as the roll-out of a second programme, winning industry-wide support and recognition for his strong and successful management of the partnership.

“On behalf of the Board, I would like to thank Florian for all that he has done to mobilise the aviation industry and to effectively drive forward the research and innovation agenda for modernising our skies. It is thanks to his commitment and outstanding leadership that the SESAR JU has been able to deliver so successfully on its mandate, accelerating the pace of innovation and delivering high quality solutions for industrialisation. I wish him the very best for the next leg of his aviation journey,” says Henrik Hololei, Chair of the SESAR JU Administrative Board and Director General for the European Commission’s Directorate General for Mobility and Transport (DG MOVE).

“It has been the privilege of a lifetime to serve Europe and to contribute to such an ambitious endeavour as SESAR and the Digital European Sky. I am immensely proud of what our partnership has achieved, and cannot thank enough the members, partners and staff of the JU for their energy, talent and unwavering support. I am confident that the partnership can soar to even greater heights, building on the excellent work done so far,” says Florian Guillermet.

Arrangements are underway to recruit the next Executive Director, who will be tasked with leading the future SESAR 3 JU, which is due to be established before the end of the year. In the interim, provisions are being put in place to ensure a smooth and effective continuation of the current work programme of the SESAR JU. “The recruitment process for Florian’s successor will be officially launched in the coming weeks, and I am confident that we will identify a new leader capable of steering the future partnership towards new milestones and successes,” adds the SESAR JU’s Chairman, Henrik Hololei. 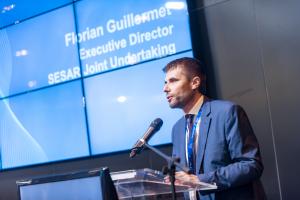