Brussels, 1 July 2021 - The SESAR Joint Undertaking today announced the appointment of Richard Frizon as its interim Executive Director, following the departure of Florian Guillermet. Effective as of 5 July, Frizon will ensure the smooth and effective continuation of the current work programme of the SESAR JU, until the appointment of a new Executive Director is made in early 2022. 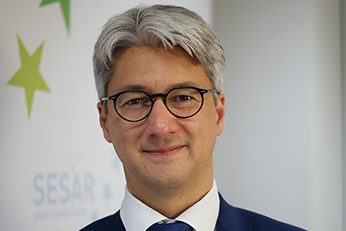 Frizon brings to the interim role over 20 years of expertise in finance and public administration both at national and European levels. Prior to joining the SESAR JU in 2019, Frizon spent 10 years at the European Research Council Executive Agency, leading the sector responsible for the agency’s budget (2.2 billion EUR). As interim Executive Director, Frizon will be tasked with managing the operations of the SESAR JU in accordance with its work plan, as well as ensuring the preparation of the future SESAR 3 JU, which is due to be established before the end of the year.

The appointment was made following a decision taken by the Administrative Board of the SESAR JU. “On behalf of the Board, I would like to congratulate Richard Frizon on his appointment. I am confident he will provide the oversight and leadership necessary to manage successfully the transition to SESAR 3 JU,” says Henrik Hololei, Chair of the SESAR JU Administrative Board and Director General of the European Commission’s Directorate General of Transport and Mobility (DG MOVE).

“I am so honoured to lead the SESAR JU, an organisation known for its operational excellence. I look forward to working with the staff and members of the SESAR JU to continue their great work through this period,” says Richard Frizon.

The process for appointing a new SESAR JU Executive Director is underway and is expected to be completed in early 2022.