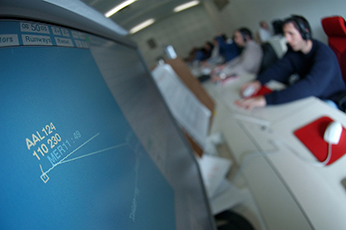 SESAR members NATS and Indra recently completed research into a capability which facilitates the generation of route changes and clearances, reducing the chances of mistyped instructions and paving the way for more complex free route operations in Europe.

Today, controllers create a controller-pilot data-link communications (CPDLC) route change instruction by typing waypoint names or selecting them from a route menu. A bespoke, non-published waypoint is more complex in its definition, requiring up to 15 digits to define a point by latitude/longitude. Manual entry of such a complex clearance is judged not feasible due to high workload and the possibility of input error. Controllers therefore currently limit route amendments to published waypoints.

In the future, flights in en-route airspace will largely be free route, with very few published waypoints in their flight plan. Flight plans will instead consist of user-defined, bespoke waypoints defined as lat/long pairs, and which may be widely-spaced. In this environment, the use of lateral interventions to resolve separation conflicts may require an instruction to resume own navigation to a latitude/longitude non-published waypoint.

Indra and NATS investigated the capability to create route change through interaction with a graphical interface on the controller workstation, and system-generate a corresponding complex clearance with no typing required. Specifically the SESAR members prototyped a flight data processor (FDP) system functionality to auto-generate a clearance based on a graphically-defined route amendment. The operational concept, which can use both ATN baseline 1 and baseline 2 CPDLC message sets, requires that the aircraft is equipped with the capability to auto-load a CPDLC message into its flight management system/computer to reduce the possibility of transcription errors on the flight deck.

Put simply, the solution will help controllers manage more efficiently traffic in a free route environment. More specifically, the solution is expected to help maintain the separation management flexibility of heading instructions that exists in today’s operations as we move to free route operations, and the ability to keep aircraft on closed-loop clearances, increasing the value of planning trajectories. The concept was positively assessed by controllers, who confirmed that the use of latitude/longitude would be particularly valuable within a free-route environment.

The solution is part of work undertaken within SESAR solution on trajectory based operations (PJ.18-02a). It is envisaged that this ATN B1 or B2 CPDLC capability would be used in conjunction with ADS-C downlink (namely, the extended projected profile or EPP in ATN B2), to provide confirmation of correct route entries on the flight-deck and support conformance monitoring tools. The use of EPP in ATC systems is currently being demonstrated in SESAR PJ31 DIGITS VLD project. Additional combined ground and cockpit aspects are being assessed in PJ.18-02a by Eurocontrol and skyguide in conjunction with Airbus and Dassault.

This work has received funding from the SESAR Joint Undertaking under the European Union’s Horizon 2020 research and innovation programme under grant agreement No. 734161.