At the end of August, Rzeszów, southern Poland, played host to a demonstration of drone solutions that will be used by public services in cities across the European Union. Partners in the Uspace4UAM project presented their research and real-life applications that will ultimately support the development of an enabling framework for urban air mobility (UAM) for the EU.

The Uspace4UAM project is part of a portfolio of projects funded by the EU body, the SESAR 3 Joint Undertaking, to develop a technological framework for the safe and secure integration of drones in Europe’s airspace (commonly referred to as U-space). Drone flights over Poland therefore contribute to the development of EU-wide regulations and systems that will allow in the coming years to increase the number of flights by aircraft - including drones - in the EU skies, while improving safety.

“Uspace4UAM is successfully demonstrating an important piece of the urban air mobility puzzle by flying an innovative drone deployment system, which has a clear and sought-after business case. By managing these flights with a highly capable U-space system the project clearly shows how selected Urban Air Mobility operations could be safely managed alongside manned aviation.” said SESAR 3 Joint Undertaking representative Robin Garrity in Rzeszów.

The result of many months of work on the project were presented in the last days of August at the so-called DemoDay in Rzeszów – the conference part was held in the Urban Lab centre, and the practical part in the Air Park Village area. The event was held under the patronage of the mayor of the city of Rzeszów, which emphasises the importance of such projects from the point of view of the needs of municipal services. Among the guests and speakers were experts from the aviation and technology sectors, as well as representatives of public and emergency services and the city of Rzeszów.

“In Rzeszów, we saw great interest in our project from the public services, especially the fire brigades, which shows the importance of drone systems in the area of ​​rescue and public monitoring. We feel excited that we are responsible for and we are running such an important project from the point of view of the use of drones in public space in European Union cities” assessed Jiri Ilcik from Honeywell, the project consortium leader.

Test flights over Poland were carried out for three scenarios of the use of autonomous drones in public service in cities: to provide emergency services with aerial monitoring from accident sites, to take a series of ortho- and photogrammetric photos for the needs of public institutions and to transport AED defibrillators. The key element of the demonstration was the integration within the U-space Service Provider architecture designed by Altitude Angel, one of the Uspace4UAM consortium members, that enables safe and efficient drone operations by supporting the operator in flight planning, automating flight approval process and supervising ongoing flights. The project is being implemented in Poland, the Czech Republic, Germany, Austria, Spain and the UK. The Polish partner of the consortium is the Rzeszów-based company Dronehub, which operates flights in Rzeszów under the Uspace4UAM project.

“Thanks to these flights, Dronehub engineers can properly adjust the technology – both the drones and software – to the real city conditions and to the needs of public services. Over a year of work on this project allows us to develop recommendations and conclusions that will contribute to the creation of an effective system of using drones by cities throughout the EU” recalled the CEO and founder of Dronehub, Vadym Melnyk. 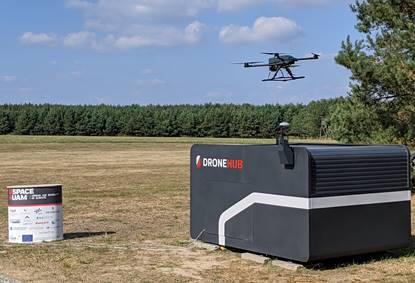