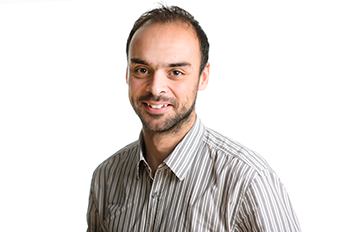 Ric de Sousa has been working as an engineer at NATS, the UK air navigation service provider, for the last 17 years mainly in the navigation and communication data link domains. In this article he explains why stakeholders are increasingly turning to space-based technologies to improve the performance of air traffic management in Europe.

Why are stakeholders looking to satellite-based technologies to manage air traffic?

The integration of space-based services to support air traffic management (ATM) is already advancing at a relatively fast pace. The advantages of these technologies are manifold, but essentially they enable seamless coverage for communications, navigation and surveillance (CNS) services and harmonisation of on-board equipment for those using the airspace. Reliance on space-based services moves the onus from directly controllled infrastructure for Air Navigation Service Providers (ANSPs) to the management of third-party suppliers, whose main business interests are not necessarily linked with aviation. This is a change of culture for many ANSPs, but it is a change that is already being embraced. The rationale for adopting these new technologies is clear to ATM stakeholders, which provides strong motivation to overcome this cultural hurdle and address the issues involved. There is the potential for significant if not disruptive benefits to be derived in this area, while keeping a careful eye on the integration challenges the new technologies will present.

What kind of services are being enabled by space-based technologies?

Space-based systems have been enhancing ATM already since the mid-1990s, especially within oceanic and remote areas of airspace. Already the integrationof these services has allowed the thorough implementation of performance-based navigation (PBN) across the globe, and a significant reduction in traffic separation standards, which have delivered clear and measurable benefits to all ATM stakeholders, from airspace users to ANSPs alike. Building on these achievements, stakeholders are looking at the next set of ATM-oriented space-based services that will be made possible thanks to Iris’ SATCOM and Aireon’s Space based ADS-B technologies, Europe’s global satellite navigation system, Galileo, and the updated satellite-based augmentation system (SBAS), EGNOS Version 3.

In the communications domain, the Iris SATCOM system is set to complement the existing provisions for delivery of aeronautical telecommunications network (ATN) data link in continental Europe. This will increase the resilience and availability of continental controller–pilot data link communications (CPDLC), communications while also underpinning the i4D SESAR concept by increasing the bandwidth available for this essential data transfer. These technologies and resulting services will mean improved air-ground data exchange as well as increased flight predictability.

Regarding navigation, the introduction of Galileo, alongside other global constellations, will enable improved accuracy, integrity and resilience to the satellite navigation capabilities of today. In other words, performance-based navigation (PBN) will be better supported, and approaches with vertical guidance (APV) will be available globally rather than in selected regions. Ground-based augmentation systems (GBAS) will also be enhanced and achieve performance commensurate with a high performing CAT III (ILS) and so become a viable alternative for instrument landing systems (ILS as a whole). These capabilities will be especially helpful to improve landing rates at airports in low-visibility conditions across Europe.

Surveillance can be enhanced and made more economical with space-based ADS-B, whereby global constellations of satellites in a low enough orbit can receive standard ADS-B messages from all aircraft. This will mean that air traffic control can benefit from a much improved traffic picture in areas where no ground surveillance is deployed and so be able to offer reduced separations to aircraft within this airspace.

How is SESAR supporting these developments?

In SESAR 2020, we have a dedicated project (PJ14 EECNS) focused on addressing both the technical and the operational validation of these technologies, along with addressing the specific integration challenges posed. This includes a review of the potential business impacts for each set of stakeholders, which must go hand in hand with the technical work if the services are to be successfully introduced to air traffic control. The project is developing several CNS solutions, including a satellite-based COM system, a network infrastructure common for all previous data links and based on multilink and modern network technologies, a GBAS system and a multi-constellation/multi frequency GNSS system.

Is the aim to stop using ground-based systems altogether?

Space-based services should not be considered as a full replacement for ground systems since they too are vulnerable to space weather events or localised instances of signal interference. Instead, it’s about using space-based technologies as the primary means for CNS with ground-based infrastructure serving as a reversion supplement to ensure continuity of services. With this in mind, stakeholders are seeking to optimise certain ground infrastructure elements, such as distance measuring equipment (DME) and instrument landing systems (ILS). ANSPs are showing that the number of terrestrial navigation aids can be reduced due to the flexibility of airspace design provided by PBN (including free routes), and the locations of this terrestrial support can be optimised. For example, in the UK we have been able to reduce the overall number of en-route VHF Omni-range (VOR) ground facilities (a widely used form of terrestrial radio navigation) in the UK by up to 60%, and in France there has been a reduction in the number of Cat I ILS infrastructure by up to 50%. Similar efficiencies can be expected within terrestrial based surveillance.

Should stakeholder be preparing now for the management of vehicles flying is sub-orbital space?

A variety of these sub-orbital operations are becoming more regular and so require ATC consideration, given they must necessarily cross traditionally managed airspace such as that above the UK and Europe. Although operations such as payload deployment launches for low-earth orbit vehicles are becoming more common, this is still a relatively unknown quantity in ATC terms, with very different characteristics to conventional air traffic, such as prolonged vertical flight. Notably a series of purpose-built spaceports are being proposed in Europe to facilitate the growth of this area of activity. In addition there will soon be further prototype flights for what are being termed ‘spaceplanes’ which fly much higher and, crucially, much faster than current commercial aircraft. In much the same way as drones are triggering new ATM concepts and ways of managing airspace, so will integration of these sub-orbital operations as they perform so differently to more conventional aircraft. ANSPs will need to devote energy to integrating these important new airspace users (especially due to the potential for economic growth they may provide), and properly assess how best to manage all types of aircraft as efficiently as possible. In the near-term, the approach will likely continue to focus on providing adequate segregation of airspace to host these different operations in order to ensure safety, whilst more is done to explore longer term approaches to managing multiple emerging forms of air travel.

To find out more on SESAR CNS strategy, read page 105 to 109 of the European ATM Master Plan