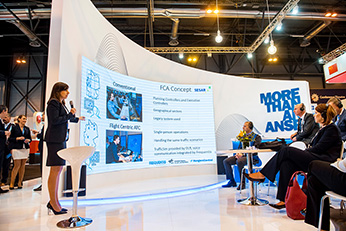 A flavour of new procedures and tools available from SESAR JU research work featured in the SESAR walking tour held during World ATM Congress to highlight new concepts aimed at increasing airspace capacity. With demand predicted to increase by 50% over the next 20 years, these procedural and technological changes are key to realising much needed capacity gain. SESAR ATM Expert, Olivia Nunez, told attendees the SESAR Solutions are pan-European in application. “Solutions modelled here can be extrapolated and applied anywhere in Europe.”

The first example was provided by a joint project between Enaire and INECO focused on enhanced arrival procedures. Satellite-based procedures allow more flexible landing patterns such as displaced thresholds and steeper glideslopes, increasing throughput at capacity-constrained runways. INECO’s fast-time simulation revealed up to 6% increase at Madrid Barajas depending on the time of day using Ground Based Augmentation System (GBAS) landing guidance. The capability can be combined with existing instrument landing procedures to allow equipage rates to increase over time, estimated to include about 25% of aircraft by 2025.

HungaroControl shared cross-border benefits arising from the latest ATC system upgrade, which enables free-route airspace across Hungary and Austria. Since February 2019, flight arrival data is shared between the adjacent centres to optimise arrival streams along with conflict detection data. Longer term, HungaroControl is working with the German research establishment DLR on the concept of flight-centric operations. A simulation involving 10 controllers handled many more aircraft when flights were allocated according to workload, rather than sector capacity. The procedure, which is still at an early stage of development, is familiar to military controllers but not used in civilian airspace, however it could result in more direct flight profiles and reduced fuel consumption.

Further airspace redesign procedures were detailed at the DSNA stand, where the French air navigation service provider described how dynamic airspace configuration can be used to reduce the peaks and troughs in traffic flow which result in congestion. The SWIM integrated network management and extended ATC planning services (SINAPS) tool provides support to flow managers to work out optimum sector configurations. It relies on the latest data mining and machine learning techniques to maximise available resources.