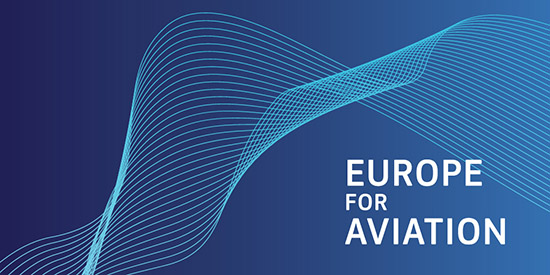 “Europe for Aviation” is the theme around which European aviation organisations working to implement the Single European Sky (SES) will gather at this year’s World ATM Congress, from 12 to 14 March in Madrid, Spain.

Strong collaboration between European aviation organisations (civil and military) is proving key to generating growth for the industry and to meeting the passenger demand for safer, smarter, greener and more seamless air travel, in line with the EU Aviation Strategy. Over the course of the 3-day Congress, these organisations will come together to show how through collaboration they can go much further in tackling pressing challenges, such as air traffic delays and congestion, drone integration, digital transformation and cyber security.

The “Europe for Aviation” stand and theatre (#849 and #1151) will host a wide range of debates, presentations and guided walking tours, illustrating the collaboration in action between European aviation organisations working to implement SES, namely the European Commission, EUROCONTROL, SESAR Joint Undertaking (SESAR JU), SESAR Deployment Manager (SESAR DM), European Aviation Safety Agency, European Defence Agency, Innovation and Networks Executive Agency (INEA), and EUROCAE. In doing so, the organisations will show how between them they cover the full project management cycle from policy and funding to research and deployment.

Register as exhibitor visitor at the Congress and gain free access to the “Europe for Aviation” stand and theatre.

Get a taste of the transformation that is underway in air traffic management (ATM) thanks to SESAR members and stakeholders through a series of events and walking tours at the World ATM Congress 2019 in Madrid (12-14 March). The walking tours will give visitors an opportunity to meet with experts from the SESAR community and see first-hand the wide variety of solutions that are being delivered and deployed across Europe.

Find below a summary of the 16 Walking Tours. For a more detailed description, download the agenda.

All Tours will depart from SESAR stand #849

Register here
(for one or several tours)

Register for the Walking Tours

In order to attend SESAR events (panel or technical sessions, walking tours...) you need to register (for free) to the WAC.

Tours will all start from SESAR stand #849

SESAR will organise several panel debate as well as technical sessions throughout the WAC:

A detailed programme will be posted here very soon.