Bridging the gap between development and deployment, Uspace4UAM, a SESAR JU very large-scale demonstration project, will tackle issues of operational concepts, regulation, and standards, while building confidence in a safe and orderly integration of urban air mobility (UAM) in every days air traffic.

Uspace4UAM will build on the CORUS project results and synergistically link up with the new CORUS-XUAM works through the Advisory Board. The project will study safety cases and their impact on system requirements and look at how regulation and standardisation can be set up to support innovators to build a sustainable business case while operating safely in a multi-modal transport network. A series of well defined, iterative and multi-national demonstrations, both with drones and UAM vehicles will be conducted. They will cover different use cases, including mixed operations, to allow the project to derive critical enablers for a wide set of UAM service applications that can be applied all over Europe. This project is set to deliver results that are of real interest to “early movers”, enabling them to bring a real market impact in the next few years. In order to prove that this will be achieved, and that indeed the project has laid a bridge between development and deployment, the project is set to deliver a number of commercial contracts for the provision of fully automated drone services, and present solutions to identified gaps towards fully autonomous Urban Air Taxi services.

“The Uspace4UAM project serves to bridge the gap between development and deployment of U-space capabilities and services thus ensuring a safe introduction of Urban Air Mobility in the European region,” said George Papageorgiou, Advanced Technology Europe Director at Honeywell Aerospace. “We are proud to be working alongside such an esteemed group of partners from the UAM sector on this project. We can only expect great results of this project, which will impact standards not only in Europe but also on a global scale.” 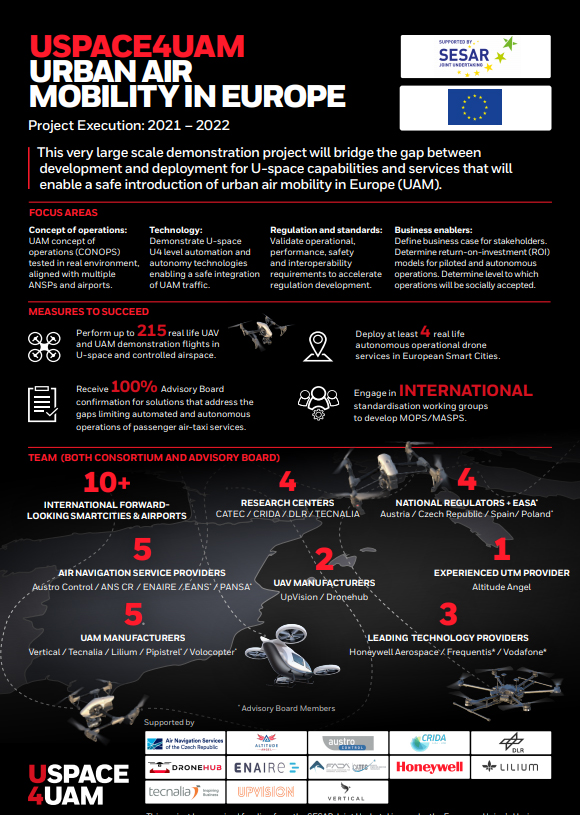