During ATC Global 2011, the SESAR Joint Undertaking awarded for the first time three projects with the newly created ‘SESAR Awards’. 26 projects were nominated by the work package leaders in one of the following categories ‘Best in class’, ‘'Most advanced for deployment' and 'Most innovative'. The jury composed of representatives from the SESAR JU and the members honoured Ms Valentina Pesacane (ENAV) and her project ‘Tactical TMA and en-route queue management’, Mr Göran Lindqvist (NORACON) for the ‘Remote & Virtual Tower’ project and Mr Daan Van Vroonhoven (SEAC), project ‘Airport operations plan definition’, in recognition of their hard work and commitment to the SESAR programme. 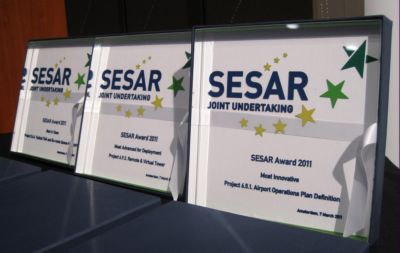 The aim of the SESAR awards is to give visibility to projects which perform particularly well. ‘Best in class’ is the first category which is designed to label the project complying best with performance indicators such as being on-time, within budget, managing well its risk assessment, etc. The second award category is ‘Most advanced for deployment’ for which also official tracking reports are crucial while the innovation award targets projects capable of demonstrating 'never done before' tasks from a scientific, methodological or stakeholders' involvement point of view. 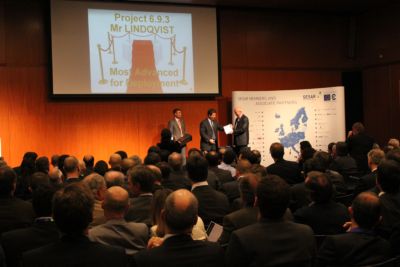 Patrick Ky, Executive Director of the SESAR Joint Undertaking, had the pleasure to first award SESAR project 5.6.4 ‘Tactical TMA and en-route queue management’ (see project description below) in the ‘Best in class’ category. The jury highlighted that the project management of Ms Pesacane (ENAV) was particularly pro-active leading to an early authorisation for execution, to the on-time delivery of project deliverables in good quality, sound risk management and the meeting of 80% of milestones so far. Additionally, the project contributes to four validation exercises included in the first SESAR Release. Mr Ky and the jury also highlighted the fact that “this award is as well a posthumous recognition of all the input that Gaetano Vito provided in SESAR before his tragic early death in October.”

The ‘Most advanced for deployment’ award was then handed over to Mr Göran Lindqvist (NORACON) for his ‘Remote & Virtual Tower’ project (project 6.9.3). The jury found that the project was closest ready for implementation which is also mirrored in its central positioning within the first SESAR Release. Through the ‘Remote & Virtual Tower’ project, for the first time National Supervisory Authorities are involved in SESAR and a regulatory case is submitted to the ANSPs.

Finally, the award in the ‘Most innovative’ category went to project 6.5.1. (‘Airport operations plan definition’) and its manager Mr Daan Van Vroonhoven (SEAC). Crucial for the jury’s decision was the project’s new approach in bridging airport operations with air traffic control as the aims at developing the link between the Airport Operations Center and the ATM Network. 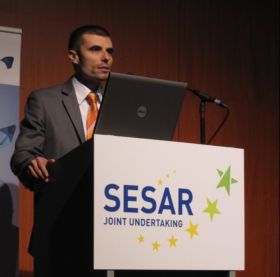 This project introduces time-based operations and thereby tactical time adherence to the NOP, or Queue Management operating on the day of operation, as distinct from strategic and flow management leading up to the day of operation. The focus will be on TMA queue management, with the impact of en-route flight phase queue management being considered. The TMA and En-route Queue Management project is intended to address the need for optimisation & co-ordination of aircraft flows particularly relating to TMA operations, addressing civil and military operations. Further factors / aspects to be considered include potential environmental and economic impacts and benefits.

Develop and validate an integrated and automated tower management system and/or advanced technologies to cover specific location needs or contingency situation to:

The project aims at developing: 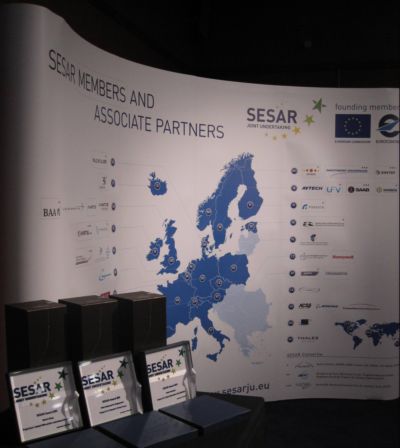