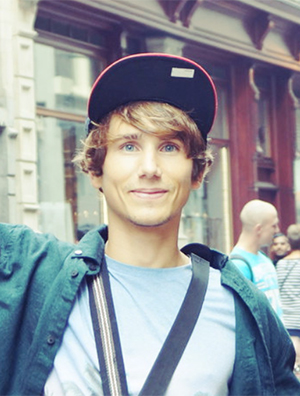 How much fuel and time can be saved in a perfect flight trajectory? This is the kind of research question that Ramon Dalmau, a PhD student from the Technical University of Catalonia (UPC), likes to get to the bottom of. It is Dalmau’s passion for solving air traffic management (ATM) conundrums that won him the 2017 Young Scientist Award and has now gained him a position as research scholar at NASA in the US. In this article he describes what winning the award has meant for his career and some of the exciting avenues of aviation research that are emerging.

Can you say a few words about your background and what drew you to research and more specifically to aerospace/ATM research?

I am an air navigation engineer from the Technical University of Catalonia (UPC), and I hold a MSc in modelling for science and engineering from the Autonomous University of Barcelona (UAB). I joined the UPC research group as an intern when I was undergraduate student, collaborating in a CleanSky project related with trajectory optimisation techniques to improve continuous descent operations. The time I spent working in this project definitely triggered my interest for ATM research. Since then, I was sure I wanted to continue as an ATM researcher. I am currently in the third and last year of my PhD, in which I am delving into the open issues of continuous descent operations.

Why do you feel researching ATM is so important to European society and economy?

Air transport is not only essential for global business and tourism, but is also a key actor in expediting the economic growth of the European countries. In addition, air transport promotes an improved quality of life for the European society. While probably unnoticed by passengers, ATM plays an extremely important role for a successful air transport system. In particular, ATM ensures that the available airspace is managed to accommodate the air traffic demand, and also that aircraft are safely and efficiently controlled from departure to arrival. However, the rapid growth in air traffic has raised concerns about congestion, environmental impact and safety. Research in ATM is extremely important to modernise the obsolete procedures and technology to accommodate the increasing traffic demand in a sustainable way, maximising efficiency, capacity and safety while reducing the environmental impact.

You were awarded the 2017 SESAR Young Scientist Award for your work on new planning real-time algorithms for continuous descent operations - Can you tell us a bit about that work?

Continuous descent operations suffer from a well-known drawback: the loss of predictability from the air traffic control point of view, in terms of overfly-times at the different fixes of the route.  A potential approach to enable such operations in dense traffic scenarios consists on assigning time constraints to each aircraft at strategic fixes for sequencing and merging tasks. Unfortunately, state-of-the-art flight management systems are of limited use in presence of time constraints: The plan is computed and “frozen” before starting the descent. During the execution, guidance strategies which continuously command thrust are typically used to nullify path and time deviations. This continuous control on thrust has a negative effect on the environment. My work proposes new planning algorithms, based on fast optimisation techniques, which aim to enable optimal updates of the plan during the descent. The major contribution to this work is the assessment of guidance strategies based on model predictive control to optimally nullify deviations. 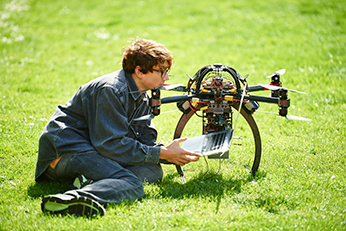 What has winning the Young Scientist Award meant for your career development?

The SESAR Young Scientist Award represents an important milestone in my life, both academically and personally. I have always felt valued by the ATM community from early on in my career as a researcher. In many ways, this excellent relationship is the best award one could ever receive. The entire journey from the start of my career as a researcher to the SESAR Young Scientist Award was a learning experience, and this award meant for me the best gratification for my hard work and perseverance. The award has motivated me up to take new challenges, which will hopefully be of benefit to the future ATM system.

Since winning the award, you have moved on to NASA. Can you describe the contrast you see between Europe and the US when it comes ATM research?

Both SESAR (in Europe) and NextGen (in US) ATM research initiatives have similar yet different objectives. In my opinion, SESAR is strictly focusing on the ATM, targeting a more decentralised and collaborative system based on the information sharing between the different stakeholders (by means of SWIM). In contrast, NextGen does not only focus on the ATM system, but also deals with other components that could (directly or indirectly) impact it. NextGen targets a more centralised and hierarchical system, strongly attached to the government. In any case, even if the new procedures and technologies resulting from the long-term research of SESAR and NextGen do not have to be identical, it is essential for them to be harmonised and interoperable.

Is European air traffic management moving with the times?

Yes, the European ATM is moving with the times. The deployment phase of SESAR, which will move from concept of operations to implementation, was activated by the European Commission with the regulation establishing the SESAR deployment framework. Several of the SESAR Solutions are already in operation, transforming and modernising the European ATM system according to the plan. In my opinion, the driver of this timely, synchronised and coordinated implementation between the different stakeholders is the excellent and well defined planning process of SESAR.

Are there developments taking place in other sectors that we should be closely following or even replicating?

In my PhD I am using model predictive control and estimation techniques which were originally developed for process industries in chemical plants and oil refineries. Advances in other sectors will definitely support a revolution in the ATM system, both on the ground and in the air. For instance, machine learning has been recently applied to develop more resilient and autonomous autopilots capable to adapt to changing conditions, “simply” by observing hundreds of hours of flying time by trained pilots! Some airlines are also taking advantage of artificial intelligence to enhance internal operations, improve fuel management and manage fleets more effectively. Another example is the enhancements in fast fibre networks and high-definition cameras, which are enabling the development of remote towers transmitting data to control centres miles away.

If you start doing research in ATM because you like this field, this will definitely help you to become successful. As long as you work hard and you are passionate, the chances of valuable achievements will be high! My main advice is to spend significant time and effort to well define the research question you want to address, with a very concise literature review before starting. You should not waste time reinventing the wheel… In addition, if you want to start a PhD, it is crucial to find an advisor with expertise in your topic which could guide you, but also to have an excellent relationship with him/her. 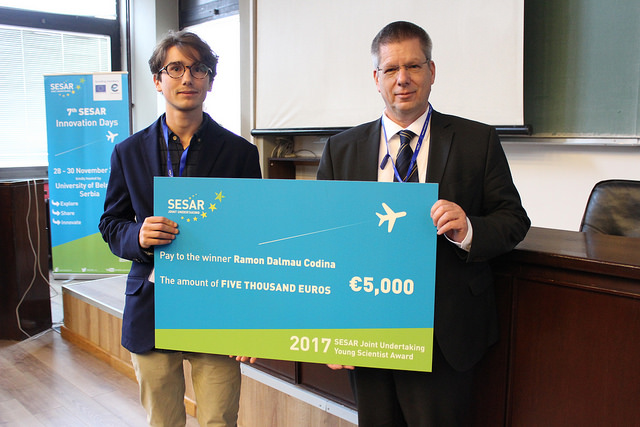 "The SESAR Young Scientist Award represents an important milestone in my life, both academically and personally. I have always felt valued by the ATM community from early on in my career as a researcher. In many ways, this excellent relationship is the best award one could ever receive. The entire journey from the start of my career as a researcher to the SESAR Young Scientist Award was a learning experience, and this award meant for me the best gratification for my hard work and perseverance. The award has motivated me up to take new challenges, which will hopefully be of benefit to the future ATM system."